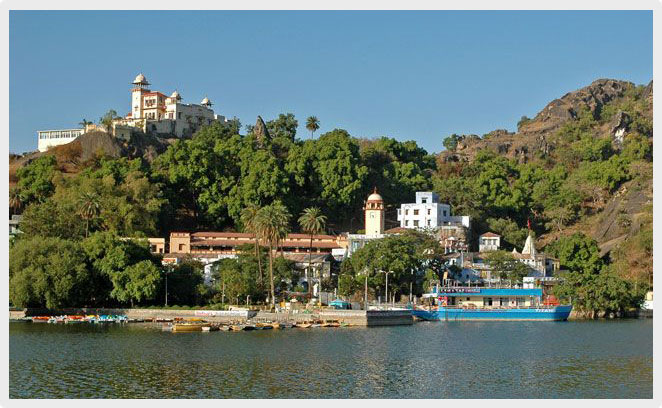 Situated at the southern tip of the Aravali range the hill retreat owes its cool climate to its rich flora covering the entire hillside that includes coniferous trees and flowering shrubs. This is also the highest point between the Nilgiris in the south and the Himalayan range up north. Mount Abu is the name of a town that claims the distinction of being the sole hill station in Rajasthan. Mt. Abu's cooling environs made it the perfect haven for kings and commoners escaping from the searing heat of Rajasthan's summers. Dotted with pretty cottages and flower filled gardens and stunning view points it's a great favourite with honeymooning couples.

Gaumukh Temple –
Another temple in Mount Abu that is worth having a look at is the Gaumukh temple. It is said that the temple marks the venue where Sage Vashishtha conducted his yagna. Flowing near it is a natural spring that gushes through the head of a carved cow (gau), giving the temple its name. The backdrop of the temple is formed by a sculpted hill temple of Arbuada (the mighty serpent), with a marble image of Nandi standing nearby.

Delwara Jain Temple –
The Dilwara temples were constructed between 11th and 13th centuries AD. Sacred to Jain, they are considered masterpieces of temple architecture. The Vimal Vasahi temple in the complex is worth mentioning as the temple took about 14 years to complete and is dedicated to Adinath, the first Jain tirthankaras. These beautifully carved temples in white marbles are dedicated to different tirthankaras. One can also see intricately carved images of female figures in dancing poses on some of the 48 pillars. Exquisitely carved ceilings, doorways, pillars and panels are just some of the ornamentation of the temples.

Adhar Devi Temple –
The Adhar Devi temple, about 3km north of town, is chiseled out of a huge rock reached by a flight of 365 steps. You have to stoop to get through the low entrance of the temple.

Shri Raghunathji Temple –
Situated near the ‘Nakki’ lake is the temple dedicated to Shri Raghunathji with a beautiful image of the deity that was placed here in 14th century A.D. by Shri Ramanand the famous Hindu preacher.

Gardens & Museums -
Beautifully laid parks and gardens are interspersed throughout the hilly paradise. Ashok Vatika,Gandhi park, Municipal Park,Shaitan Singh Park and Terrace Garden are some of the noteworthy gardens. Located at the Raj Bhawan, it was a collection of archaeological excavations dating back to 8th-12th century A.D. It also has Jain bronze carvings,brassworks etc. for viewing.

Guru Shikhar(Highest peak) -
Gurushikhar holds the honor of being not only the highest peak of Mount Abu but the whole of Aravali mountain range, Situated at a height of 1722 meters from the sea-level, Gurushikar provides a breathtaking panoramic view of Mount Abu town and green aravali range.

Nakki(the lake) -
The picture perfect location of the lake surrounded with mountains, gardens and rock formations also make it a very good location for photography. In the evening the setting sun makes the canvas. The lake too, has survived to tell the tale. Picturesquely set, with the hills rising all around it, the lake has several islets to which you can hire boats. An interesting facet is the many rock formations around the lake. They have been named Toad Rock, Nun Rock, Nandi Rock and Camel Rock because of their resemblance to these figures. The road appears to be looking broodingly down towards the lake, as if contemplating jumping in. Nun Rock is a large smooth rock, as it supposedly looks a woman with a veil.