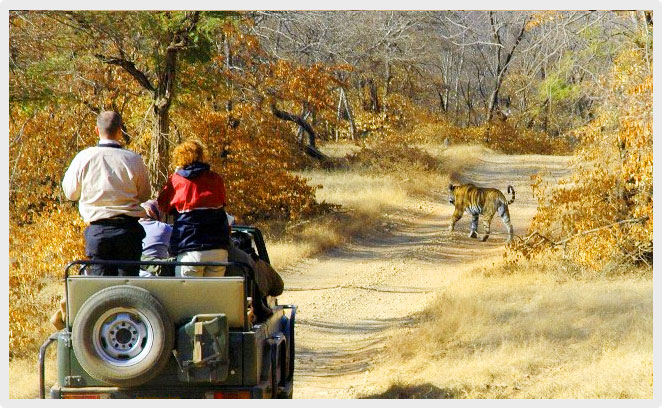 Sawai Madhopur is on the main railway line between Delhi and Mumbai and there is a wide range of trains to choose from.
Ranthambhore fort:  the fort in the heart of national park was built on a rock cliff at an altitude of over 200m by Chauhan Rajputs in the 10th century. built in 944 A.D. it changed hands number of times over the next 6 centuries.

During the reign of Raja Hammir Dev in the 13th century, the eminence of the region was widely admired. The fort is witness to the first ever jauhar declared in Rajasthan on hearing the word that the brave Rajput had succumbed on the battle field. Although Hammir Dev returned victorious and when learned of the mass suicide, beheaded himself before the deity of Shiva at the fort.
It was sacked by Alauddin Khilji 1301 and regained by Rana Kumbha in the middle of the 15th century. it was again seized by Akbar in 1596. Finally it was later granted to the rulers of Amber by Emperor Aurangzeb. Ruined pavilions, bastions, cenotaphs, colossal gates and splendid monuments are interspersed with the majestic fort. Contructed of red Karauli sandstone, there are Hindu temples of Ganesh, Shiva and Ram lala Ji, as well as Jain temples dating back to 12-13th century.
It is the temple of Ganesh, which is the most revered at the fort and during the annual Ganesh fair held on Bhadarapad Sudi Chaturthi, thousands throng from every corner  of the country to seek blessings of the Lord Ganesh for happiness and prosperity.

RANTHAMBHORE NATIONAL PARK
The tiger is the biggest attraction of the park. Covered by Project Tiger, it is a conservation project, situated about 14km from the town of Sawai Madhopur. The park covers an area of about 1334 sq. km. with a core area of 300 sq. km. The park also has other species of the cat family like leopards, and jungle cat, members of the dog family lake jackal, fox, hyena, sloth bear. There are various species of deer, sambhar, chital, chinkara and nilgai. In addition a variety of birds including migratory ones is drawn by the wide variety of flora and its four lakes. Early morning and late afternoon are the best times to view the wildlife. Park is open during the period from October to June.